UAD Spark: Get 20+ of the best UAD plug-ins for a low monthly price. Learn More ›

Phase shifting, flanging, and chorusing are pretty standard pieces in every engineer’s effects arsenal today, but while they may seem to offer a similar effect, they’re certainly not the same. If you’re not sure of the differences between them, don’t worry. You’d be surprised how few actually know these distinctions and how they can affect your sound, but by the end of this article you can amaze your friends and win studio bets by what you know about phase shifting, flanging, and chorusing, as well as a little bit of doubling and the Haas Effect thrown in.

There are three basic modulation effects used in the studio today that are all closely related: phase shift, chorus, and flange. The most simple difference between them is that both a chorus and flange effect come from a modulated delay that’s mixed back into the original signal, but a phaser uses no delay at all. Just to be clear, modulation means that your source signal is being modified by another one, which in the case of these effects usually means an oscillator.

The main differences between a flanger and a chorus is that the flanger uses a shorter delay. Technically tremolo and vibrato are also modulation effects, but since they’re generally considered primarily guitar and keyboard effects, we won’t include them in this discussion.

The setup for tape flanging.

The flanger is a dramatic effect that was first derived in the 60s by recording a song on two tape recorders at the same time, then slowing down one of them by placing your finger on the tape flange (the metal edge of the reel that held the tape in place), hence the name “flanging.” One of the first hit songs that it was used on was a 1967 hit by the British group, The Small Faces, called, “Itchycoo Park” (it’s actually been reported to have been invented by none other than Les Paul in the 50’s though), which featured a large dose of the effect at the end of the song. As these things usually go, once the song became a hit, every artist and producer wanted the effect after that, and it was used extensively by The Beatles, Jimi Hendrix, and many others of that time. The problem was that setting up the four tape recorders needed for the effect was both expensive and very time consuming, so it wasn’t long before an electronic simulation of sorts soon came on the market. 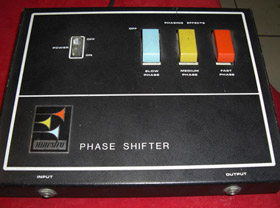 Back in the 70’s before the introduction of inexpensive digital delay electronics, an analog phaser was the only way to get any sort of modulated effect, but it was a weak comparison to intensity of a deep flange, which is why phasing isn’t used much — it’s just not that dramatic an effect.

If you were a guitar player back then, the Maestro PS1A Phase Shifter was the unit to have, but since there was very little control over the effect (just three speed selector switches), guitarists were constantly on the lookout for something similar that was more usable and adjustable. That came with the Boss and Roland Chorus devices introduced in the late 70’s.

Chorus differs from flanging in a couple of aspects; the delay needed to achieve the effect is longer, and the frequency notches aren’t random like in flanging. You can thank Roland and their Jazz Chorus line of guitar amplifiers introduced in 1980 for starting the chorus craze, which was soon included across their line of keyboards as the world became hooked on the effect. Soon after the amp received such a great response, Roland introduced a version in their Boss line of stomp boxes that engineers used to easily add the effect wherever needed during a mix. The BOSS CE-1 Chorus was great piece of hardware, and is now it’s available as a UAD plug-in. 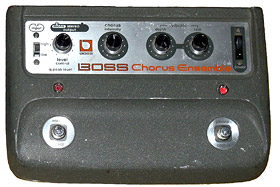 Indeed, it’s very easy to fall in love with the sound of a chorus because it’s lush sounding, and if used in stereo, can really widen the sound of a track quite a bit. If you listen to many hits from the 80s, you’ll hear the effect used, used, and used some more.

Flangers are a lot more dramatic of an effect than choruses, but it wasn’t until the late 70’s when an electronic component called a “bucket brigade” circuit became available that an electronic version of the effect could come close to the one using tape recorders. One of the first true electronic flangers to be introduced was the MXR Flanger/Doubler, which is also now available from Universal Audio as a plug-in.

One of the coolest things about the Flanger/Doubler is that it has a built-in doubling effect. To understand exactly what this is, we have to start at the beginning with the Haas Effect. The Haas Effect is a very useful psychoacoustic theory that states that a delay of 40 milliseconds or less (depending on which text book you read - sometimes it’s noted as 30 milliseconds) is not perceived as a distinct event. That means that if a delay on a snare drum was set to 50 milliseconds, you would hear two separate events - the initial snare hit, then the delay. But if you set the delay to less than 30 milliseconds, the two would blend together and you’d hear them both as a single event.

This is important because it means that a short delay of less than 30 milliseconds can be used to thicken a sound that seems a bit thin, or it can be used to “stereoize” a mono track by panning the dry track to one side and the delayed to the other. Regardless of how you use it, the Haas Effect is a very powerful, if sometimes overlooked tool in your mixing toolbox.

On the other hand, a delay longer than 40 milliseconds starts to sound doubled. True doubling means that you play or sing a track as closely as you can to the first one a second time. The inconsistencies in timing and pitch between both tracks make the part sound bigger. This was used extensively as far back as The Beatles, who loved the effect so much that they used it even when they only had 4 tracks total to work with. Although not exactly the same, you can artificially create a double effect by simply adding a digital delay of between 60 to 120 milliseconds to the vocal or instrument at around the same level as the original part, then turn the feedback control to minimum so that you get only one repeat, something that the MXR Flanger/Doubler does very well.

Modulation Effects in Use

Massive flanging is a very specialized effect where a little goes a long way, but some very subtle flanging can bring most instruments to life. Try some on the bass, the ride cymbal, or strings to give it that extra special something that brings the sound to life.

While chorusing seems to be commonly used on guitars and keyboards, don’t overlook it on both lead and background vocals. Sometimes a vocal with a bit of a tuning problem can be naturally helped with a subtle chorus instead of autotuning.

Lead instruments just love doubling so don’t be afraid to try it on everything from vocals to guitars to horns, but don’t forget background vocals to make them sound bigger.

Bobby Owsinski is a producer and music technology consultant who is the author of 16 books about recording and the music business including The Audio Mixing Bootcamp and The Mixing Engineer’s Handbook. Read his music marketing blog at Music 3.0 music industry blog, and his production blog at the Big Picture production blog. You can read about his books at bobbyowsinski.com, or follow him on Twitter for daily blog updates.

Recording Tyler, the Creator with Apollo and UAD

Learn how Grammy-winning producer RAC uses UAD and Apollo to sculpt deep, expansive low end, how he uses distortion on drums, and why guitar is all over his latest album, BOY.